The Johnson & Johnson vaccine currently being used in South Africa against COVID-19 is very safe as it underwent rigorous tests before being approved for use in the country, Free State Health MEC Montseng Tsiu said.

“For vaccines to be used in South Africa, they go through a rigorous process and have to be registered by SAHPRA (South African Health Products Regulatory Authority) to prove that they are safe,” she told journalists during the official launch of the COVID-19 vaccination programme for Department of Correctional Services (DCS) officials and inmates for the central region at the Grootvlei Correctional Centre in Bloemfontein on Wednesday.

The MEC, who also got the single-dose J&J vaccine a few months ago said she has not experienced any complications and encouraged people to get vaccinated.

There have been concerns from some people on the efficacy of the J&J vaccine against the Delta variant currently dominant in the country.

People have also questioned the vaccine’s safety after several batches were destroyed in South Africa following an instruction from the US manufacturer due to fears of possible contamination.

“The contaminated vaccines were destroyed. You remember there was a time when we suspended our roll-out programme in the country. We were checking for even the slightest fault. The vaccines we are using now are very safe,” Tsiu explained.

The offenders are receiving the J&J vaccine while DCS officials are getting the two-dose Pfizer vaccine.

“The J&J is more ideal for the inmates because it is a single-dose vaccine and therefore easy to administer as there is no need for follow-ups because some of them may be released and move to another place.”

There are 13 720 inmates at correctional facilities in the province as well as 4 068 officials.

DCS Regional Commissioner Subashini Moodley said the Free State and the Northern Cape have the second lowest number among inmates in the country.

She said at least 2 318 inmates were released when the pandemic hit the country last year in order to ease congestion in prisons.

“We don’t have a problem of overcrowding in the Free State and Northern Cape,” said Moodley.

“We work very closely with the courts . . . We are not overcrowded and we are able to manage and contain the virus . . . We are vaccinating both sentenced and remand detainees.”

There have been 26 deaths and there are currently 76 active cases.

The Free State alone accounts for 970 cumulative cases with 898 recoveries.

A total of 16 officials have succumbed to the disease and there are 56 active cases.

Four inmates in the province have died following complications from the disease.

One inmate, Kamogelo Kambule, said the outbreak of the disease made life behind bars very difficult and he was glad inmates had been prioritised for vaccination.

“Following the outbreak of the coronavirus, it was very difficult for us as offenders. We are in one place . . . we do not have much movement. So, we had to follow the protocols.

“We had presentations on screening for COVID-19 and what to do if you suspect you are infected with the coronavirus. It was tough but we had to adjust to the situation,” said Kambule.

Another inmate, Lebohang Michell, said he was excited to get the jab and is in good health.

“I was anxious before getting the vaccine. I couldn’t sleep but after getting it, I feel very good,” said an excited Michell. 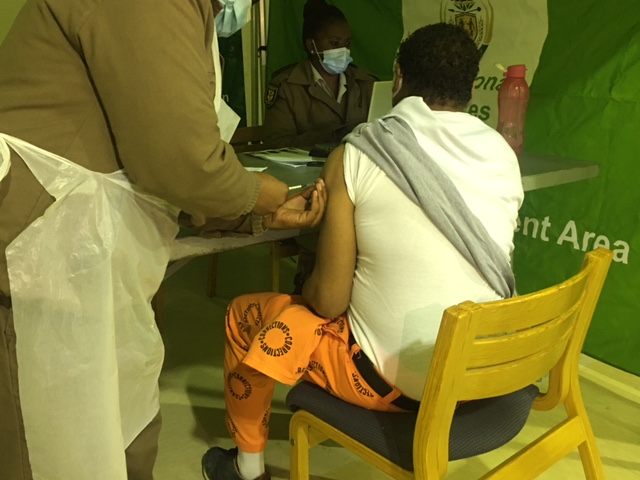 FIGHTING THE PANDEMIC . . . An inmate at Grootvlei Correctional Centre receives the J&J vaccine