Despite a marked improvement in water storage capacity across the Free State, water authorities have warned that the availability of the precious resource in some parts of the province remains a problem.

The provincial office of the Department of Water and Sanitation (DWS) says while there is generally adequate water in the province, some of the major dams remain below 50 percent capacity.

Vernon Blair from the DWS told journalists during a tour of the Krugersdrift Dam, west of Bloemfontein, that water levels in most dams should be adequate to take the province to the next rainy season, but there is still need to conserve the water.

“Our rainy season starts around October and our current water levels seem quite good,” said Blair.

In 2016, the province experienced a critical water shortage with dams averaging 54.8 percent while others completely dried up.

The latest dam report indicates that Krugersdrift dam is presently at 89.2 percent while Kalkfontein Dam is sitting at 58.7 percent.

Sterkfontein is at 94 percent; Gariep Dam 79.6 percent; Groothoek Dam 62 percent; and Knellpoort Dam in the Bloemfontein system is 58.7 percent full.

Rustfontein Dam however sits at only 29.5 percent and Fika Patso Dam in Maluti-a-Phofung has declined to 33.8 percent.

DWS provincial head Tseliso Ntili said in an earlier statement that the fact that most of the Free State water storage system is in a better state as compared to previous years should not breed complacency.

He said water conservation and demand management initiatives must remain in place.

He pointed out that as a result of the country moving to Level 1 of the national lockdown, there is an anticipated increase in water use as economic activities resume.

At the peak of the national lockdown implemented by the government to curb the spread of the COVID-19, a total of 520 water tanks were delivered and installed across the province to ensure communities — particularly those in heavily populated informal areas — practised good hygiene by washing hands regularly.

Ntili also warned communities that climate change made it impossible to predict the rainy seasons and emphasised the importance of cutting down on high water use.

“As climate change is becoming a new normal, a business-as-usual approach can no longer be a solution . . . we relentlessly remind all water users to cut down water demand in particular high-end users,” he said.

“We have to explore alternative water sources, leading to less reliance on surface water.” 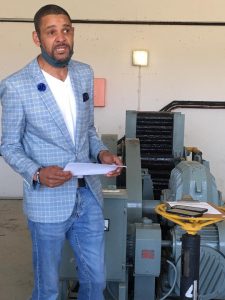