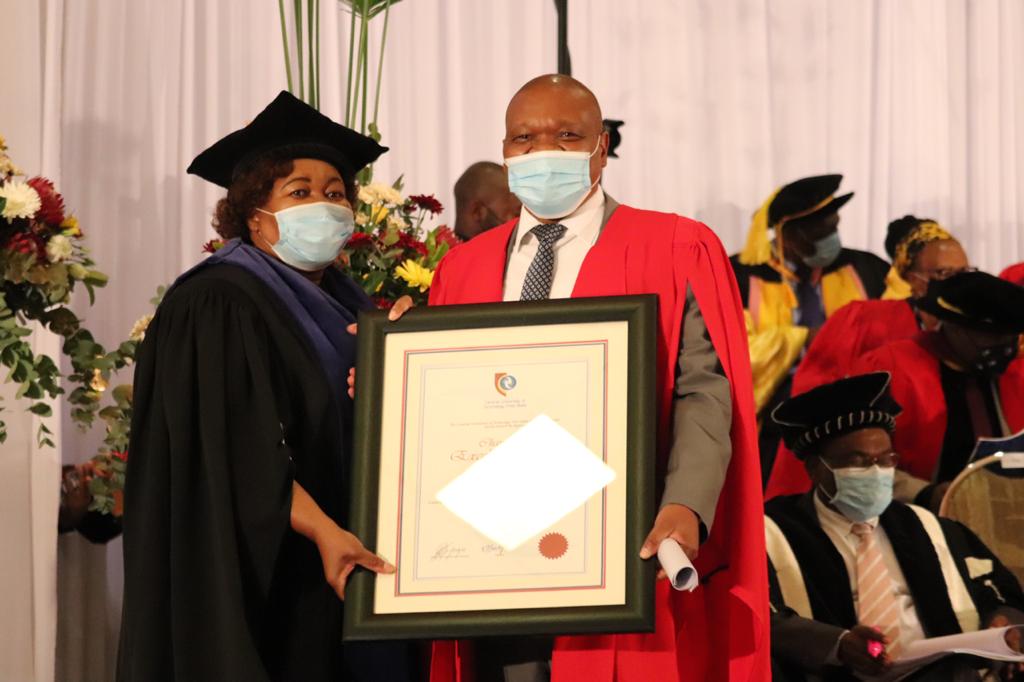 Free State Education MEC Tate Makgoe has dedicated the Chancellor’s Excellence Award he received from the Central University of Technology (CUT) today to the hard work of teachers and all the other staff that have given him support.

“Although this is a personal award, it is . . . a result of dedicated teamwork involving the hard work of our teachers, school governing bodies and officials of the Free State department of education,” said an elated Makgoe.

“Growing up in the dusty township of Tumahole, Parys, I could not have possibly imagined that one day I’d be standing in front of esteemed academics, receiving this distinguished award.

“This accolade is a symbol of appreciation for one’s capacity to guide and motivate others to excel, with a proven commitment to serving and contributing to the development of our country, our province and our communities.”

According to the CUT, the Chancellor’s Excellence Award was conferred on Makgoe for his sterling leadership excellence and immense contribution to the advancement of education, not only in the province, but nationally, as his work has touched communities and institutions alike.

Makgoe has been the education MEC for about 10 years and over that period, the province has excelled as one of the best in the National Senior Certificate (NSC) Examinations.

Last year, the Free State scooped the top spot in the NSC exams, making it a record fifth time over the past eight years.

Makgoe said he was happy that some of the students who have done well in the matric exams come from schools situated in very poor communities and which rely heavily on government support.

“Today I receive and accept the honour on behalf of all the Free State teachers who have immensely contributed to imparting knowledge to our children – most of them drawn from quintile 1-3,” he said.

The MEC committed to work closely with CUT in an effort to improve the quality of education in schools – particularly in science, technology, engineering and mathematics, also known as STEM – and make a positive impact in the socioeconomic development of the country.

“Together with CUT, we want to re-engineer and recalibrate the whole education value chain, starting from primary, secondary schools, tertiary and the workplace.”

Makgoe bemoaned the lack of interest in mathematics by many young people who claim it’s a difficult subject, saying in today’s world, one cannot do much without it.

“The ability of learners to succeed in today’s technically and digitally orientated work environment is increasingly dependent on their understanding of mathematics and its application in practical situations,” he said.

“In fact, mathematics has become essential for all learners, including those preparing to become lawyers, leaders in business and government and, more generally, for developing scientifically, mathematically and technologically . . .”

Makgoe has also been awarded an honorary doctorate in Business Administration by the Vaal University of Technology.

A day after family of six was found dead, woman ‘poisons’ self and her kids