The rapidly spreading Delta variant of the coronavirus has been detected in the Free State as well as four other provinces in the country, President Cyril Ramaphosa has said.

The other provinces are the Eastern Cape, Gauteng, KwaZulu-Natal and the Western Cape.

Ramaphosa said this when he announced on Sunday evening that the country was moving to Alert Level 4 for the next 14 days in light of the sustained daily increases of COVID-19 cases in recent weeks.

“We now have the Delta variant,” the president said in the televised address.

The variant was first detected in India at the end of March this year and is now found in 85 countries.

“The Delta variant spread like wildfire in India in an alarming manner . . . the evidence we have is that the Delta variant is rapidly displacing the Beta variant, which has been dominant in our country until now,” he said.

“We are concerned about the rapid spread of this variant.”

According to Ramaphosa, the Delta variant is more transmissible than previously circulating viruses, meaning it is easier to catch through person-to-person contact.

He said it is thought to be twice as contagious as the Beta variant.

And because it is more contagious, it can infect far more people.

“As with the previous variants, you can pass it on without even knowing you have it . . . there is now emerging scientific evidence that people previously infected with the Beta variant do not have full protection against the Delta variant, and may get re-infected,” said Ramaphosa.

“And because it is much more contagious, the measures we have so far adopted to contain the spread of the virus may no longer be sufficient to reduce transmission.”

It is however not clear if the Delta variant causes more severe symptoms or not.

“Preliminary data from other countries suggests that it is not more severe,” said the president.

“Reports from some countries, including from our continent, also suggest that infections and clinical illness in children may be more common with the Delta variant, even as the overall rate of infection remains substantially lower than in adults.

“The rapid spread of this variant is extremely serious.”

The following measures will be in place across the country from tomorrow until Sunday, July 11:

The closure of schools and other educational institutions for the winter holidays will be brought forward.

Schools will start closing from Wednesday, June 30, and all schools will be expected to be closed by the end of the week on Friday.

Contact classes at tertiary institutions will also end by Wednesday and there will be limited access to the institutions.

Ramaphosa said the Ministerial Advisory Committee advised that the limited restrictions previously imposed were not that effective and that a prohibition on alcohol sales will ease the pressure placed on hospital services by alcohol-related emergency incidents.

He said because of the burden of infections in Gauteng, travel in and out of the province for leisure purposes will be prohibited.

This does not include work, business or commercial travel, transit through airports or for the transportation of goods.

Visits to old age homes, care facilities and other ‘congregant settings’ will be restricted. 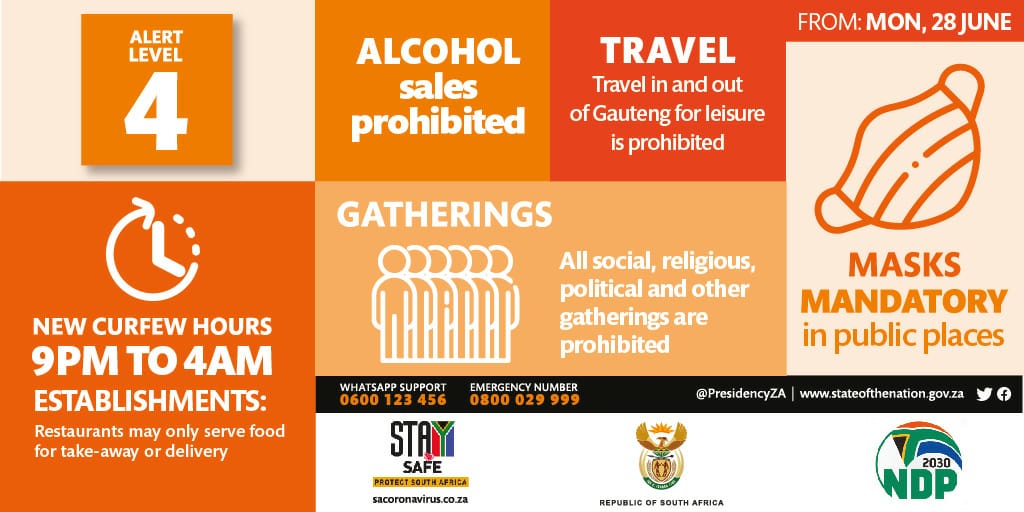 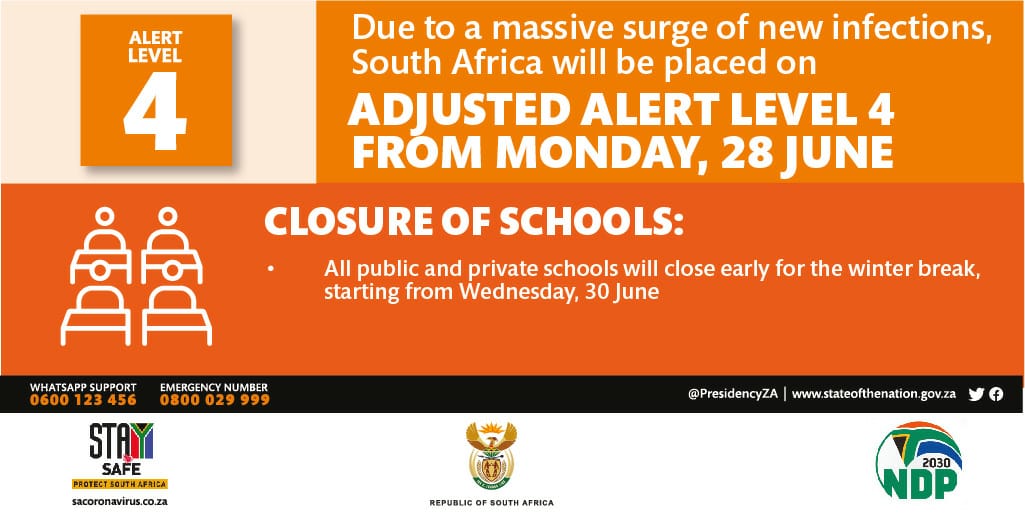 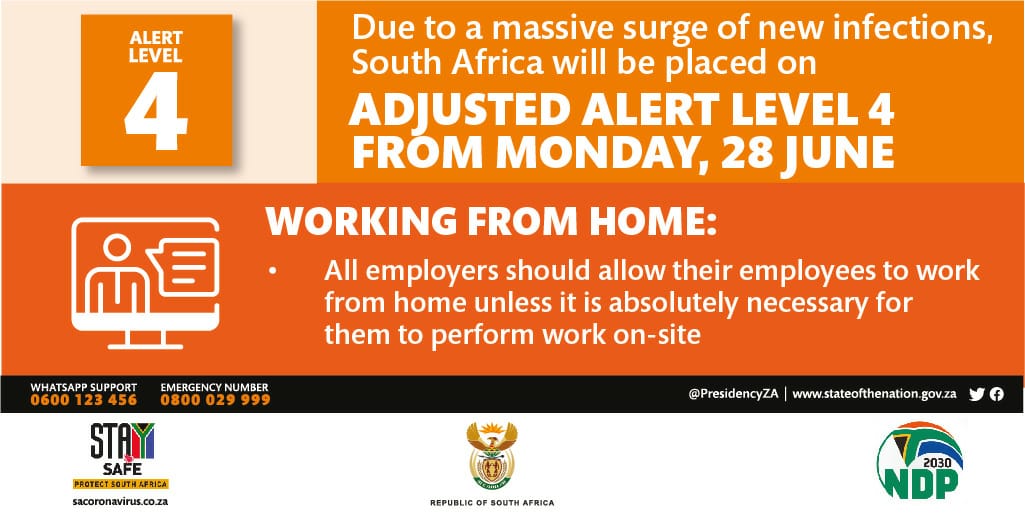 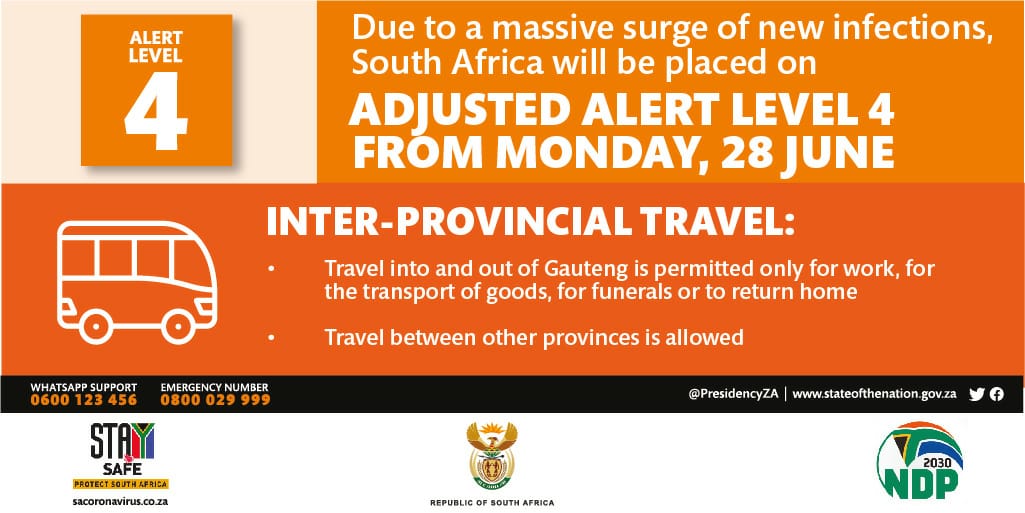 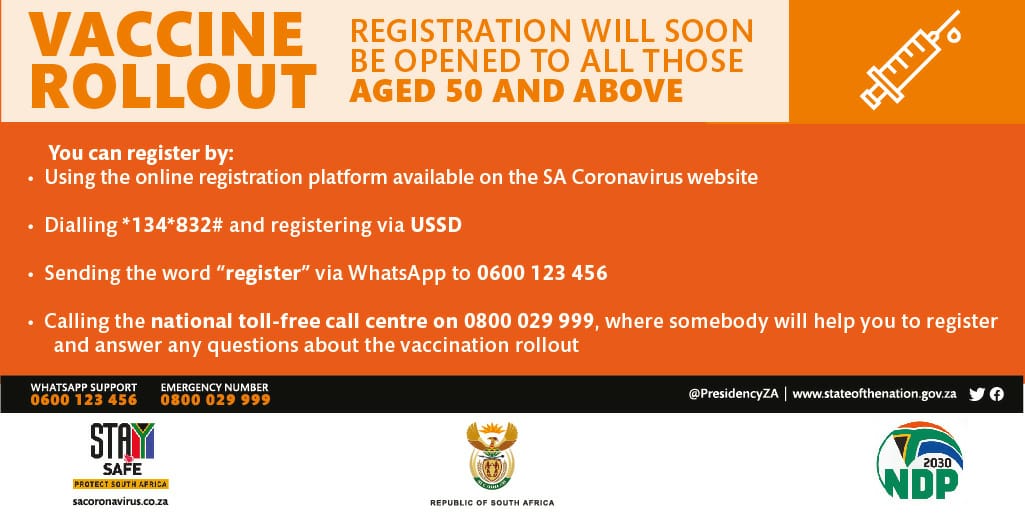 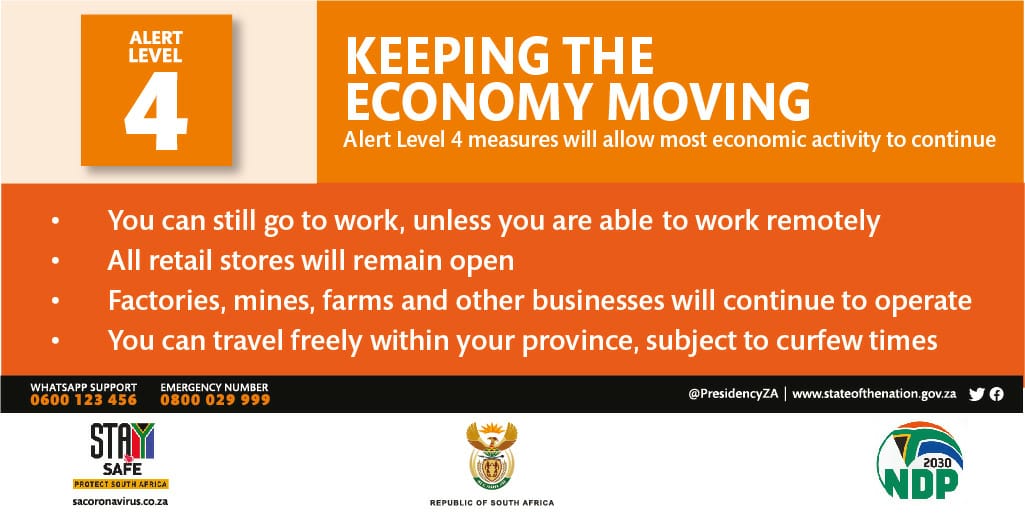 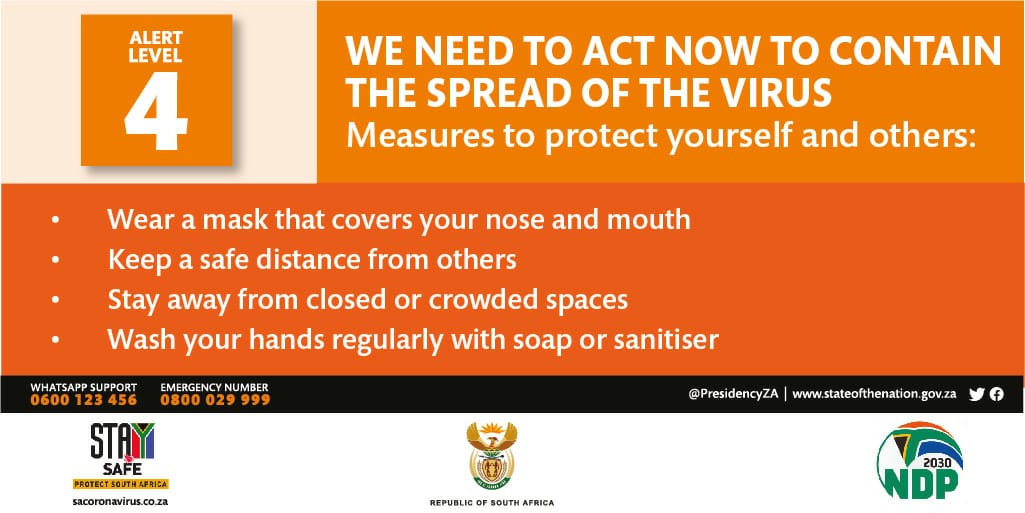 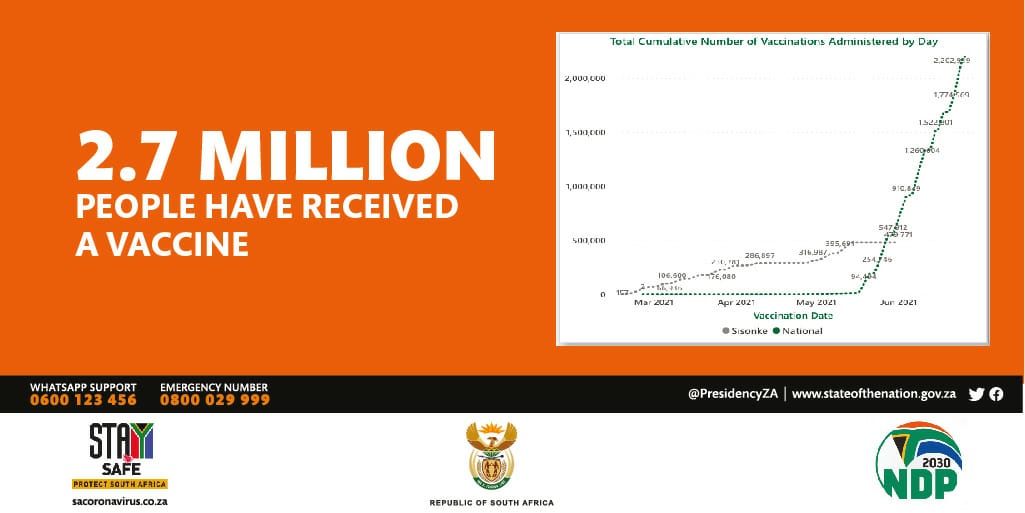